Welcome to the Hills..!! 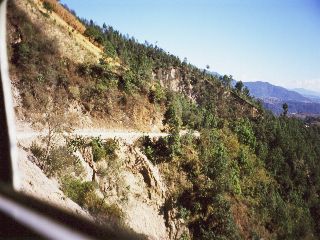 Dehra Dun was a disappointment…… Just an old, dusty town……

I don’t know why, I had imagined it to be a lush green hill station with crisp mountain air, quaint cottages, misty meadows and picturesque schools.

Maybe it was because I had heard about the glamorous Doon School…. Or maybe, it was my cousins who used to come from Dehra Dun during those summer holidays long back…. They would come..... with their glowing pink skin, lustrous hair and a confident air about them making me feel a scrawny, ugly duckling than ever.....


‘Doon’ means valley mama’ Gautam pointed out when I murmured my disappointment.

Gangotri can be accessed only by road. Our plan was to camp at Harsil and to visit Gangotri on the next day. We could stop at Mussourie on the way.

“The view on the way would be worthy of the tedious journey”. I hoped.

Mussourie was another disappointment. A shabby town with old buildings and a few hotels. We didn’t feel like getting down there.

Our Qualis moved ahead slowly. The road was winding along huge mountains. The mountains looked sort of dried up. People were few in number and the poverty evident. There were waterfalls and ropeways in between but it all looked sort of dusty and dry.

They towns on the way were also unimpressive, shabby and dirty. There were no good places to eat. The roads were narrow and bad.

We had tea at Uttarkashi, another unimpressive town.

“The road ahead is bad.” The driver told us.

“The route from UIttarkashi follows the Bhagirathi river with sharp twists and turns. Sometimes the road ascends high above the valley, while at other times, it drops right down to the river. The entire Bhagirathi valley is amazingly green and at Harsil, the river suddenly opens out into this wide picture perfect valley, cutting a broad path with sandy beaches on both sides, surrounded by apple orchards, pine forests and beautiful snow mountains. It is this beauty which made Raj Kapoor choose Harsil as the setting for his film, Ram theri Ganga Maili”. I remembered reading it..

I looked forward to the glorious view.

But our perception was different. It was getting dark. The Qualis trudged ahead slower than a snail. There was a light drizzle. It was getting chilly. There were not many lights to be seen. Just the narrow, rugged, winding road……

From the way we were climbing up, we knew that the valley on one side was pretty deep. The roads were water logged at the base of the valleys. We had to climb all the way up and then down towards, the bridge, to cross the river as we passed from one mountain to the next.

It was almost nine pm. We were tired and hungry. There was not a single restaurant to be seen.
Finally, the milestone showed that Harsil was only a few kilometers ahead, but there were no lights to be seen ahead. Each kilometer felt exactly 1000 metres.

Finally, we saw four or five lights ahead. Few men covered in shawls were coming out of a shop. We asked for directions. To the camp. They showed a path winding deep down into the valley. Into the eerie darkness..

There was just one light. The gate was closed. The sound of a generator could be heard. There was an arch above the gate which said, “CHARDHAM CAMP”. A bell hung down from the arch.

Peeps got out into the biting cold and rang the bell, while we sat in the warmth of the jeep, cocooned in sweaters, shawls and woollen gloves.

It's a very nice feeling isn't it when you are digging into old stuff and finding these cool things that you had something to do with. All the memories attached to it....

I am glad you found time to check out my blog, honestly I am so swamped with work right now that I am harldy finding time to do anything else...

So dehradun was a dissapointment, eh? Have you guys been to Darjeeling? I want to go there or Shimla sometime.

I dream of going to that side of North..

Have only travelled up north to Delhi.But always want to visit Tibet.

What were you expecting by the way ?
Dancing mermaids? Pole dancers?
=)) I know wrong question to the right lady… but then, u got what I meant ..rite? ;_)

So another place less to see. Makes me happy :-) Hope you have better luck at the next stop.

oh.. no.. thats wasn;t a good sign of the trip!!.. may be its summer? is it so?.. i haven't been to those ares nor have seen the photo.. so no idea!.. but i think you should have moved towards the bank of the river during day time so that you could see the nature!!..

wait a min. tell me this. are u also on strike? i mean u ve been touring for some time now i guess.

krak..
hmm.. u r right..
justme.. il soon..
jo, yes..it was a dissapointment.. we had first thought of darjeeling and shimla but felt it was too commercialised..
iic, starry nights..
u should visit these places..
geo,
:)) eda pavam njan.. enthokkeyo mohichu poyathalle.. nee chumma vazhakkondakkathe..
:))
alexis.. hmm u dont have to bother abt dehradun..
esvee.. :)) chumma chiri..
sujith,
hmm.. u r rt..
lash,
im back home working hard as a woman, doc and friend as usual..
:))

oh!too bad .I always wanted to go there:(

ever tried Munnar? i am sure u won't want to go bak ;)

wandered on to this blog and have been spending the last few minutes lingering around. u have a way with words, doc-woman-friend; am sure u must hv been told tht quite a few times already! shall come back some other time for sure. meanwhile happy blogging!

maya,
u SHOULD go there.
dewdrops.. iv been to munnar its a very serene and lovely place..
but there is no snow or snowcapped peaks there.
adarsh, velu,
txs a lot..
:))

We didn't venture there as we were told that it was not the season, plus this holiday was an enforced break for my Dad. Now I am glad we missed it! Hope we get good news in the next episode :)

Waiting for the upgrade:) :)

:-(
Hey am sad to hear that u didnt like doon!
COz Dehra doon is my native place..basically where my moms grown up!..although I have myself hardly been there!...only a couple of times as a kid but have some very good memories of it and mussorie especially coz it was snowing!

But I guess over the years the beautiful valley has changed into a old dusty town..sad what we have done to nature!

siverine,
the season is from may 1st to dec first..
samarina, white forest,
txs
ekta,
maybe its cos it is summer.. but i always thought summer is the best time to visit hill stations..maybe my expectations were too high..

i was planning to hit uttaranchal in the coming months to beat the delhi heat...i had high expectations too...will the next post have better tidings? will wait for that.