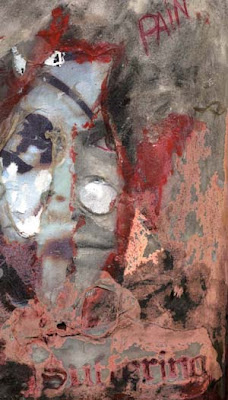 Death stared at me.

Her whole system was failing.. It was obvious.

Death was in the room already.. I could hear it in her rattling breath.. Her clammy skin..Her sunken eyes.

Her gaunt body was struggling to take in the oxygen through the mask.. Her hands and feet were cold and clammy.. But it was the eyes .. The tortured sunken eyes that gazed around.. Beseeching solace.. That struck me with the knowledge....I know that eyes.. seen it before..
I would be certifying her death before sunrise.. I was sure.

Oh I knew her history.. HIV positive.. Her husband had presented it before he passed away.. Leaving her two kids with her. 8yr old girl and six year old boy.

Both kids were HIV negative.... "Thank god..!!" Her brother who was looking after them now proudly told me that. "The kids are negative..!"Even before I asked about it..

She had been on treatment for past two years... But she had developed cancer.. Aggressive type.. Rare in women of 35yrs.. but expected in HIV positive cases.

"But how?""Her condition is too bad."

"She wants to see her kids now." Please refer her to a hospital at Palghat.

"But Palghat is too far off.. at least ten hours.. something may happen on the way."

"Yes. But it will happen even if we don't take her."

"But her condition is too bad. She wont survive the long road journey"

"What will you do if something happens on the way?"

"We will take her to some hospital."

"I cant permit it. Her condition is too bad."

"Then bring them here."

"There is no one to bring them."

"Well i cant permit it. I will not refer her in this condition. You get disharged against medical advice." I said walking off.

I wouldnt be a part to it. what if something happened on the way. our hospital and I could be blamed.. these were sensitive issues..

Me the woman and mom could understand them but me the doc couldnt support it.

I prayed that she should see her kids.. Nothing should happen on the way..

Ragini died half an hour before they reached home.

She couldn't see her kids.