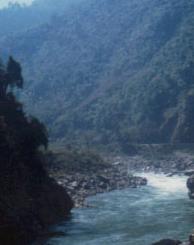 We were in high spirits…!

The breakfast had been lovely. It was served as a buffet in a large tent they called “The Mess”.

Delicious hot porridge, piles of toast, butter and jam and a tray full of a doughnut like sweet that was served with apple sauce ... Coffee/ Bournvita. I watched my boys gulping down like starving Labradors. I too decided to forget my diet for a day and silence the rumblings in my stomach. Hmmm..The mountain air had made all of us ravenous..!!

My heart danced…! We all piled into the Qualis. The driver switched on the music… “Meri sawalom kaa…jawab dooo…Doooo naaa….” Sang the lover..The melody fit into the curves and twists in the road. I giggled and started singing along with funny actions. Pinching Taj’s cheeks and pulling Gautam’s hair. Peeps pretended not to see. The boys looked in embarrassment at the driver. But I just sang along.
.

The road carrying on from Harsil, enters the dense green gorge of Bhiron Ghati. After crossing the Jadh Ganga river, beyond Lanka, the road winds its way to a halt at Gangotri at an alt. of 10000 ft, 24 km. from Harsil. All along this route, we were surrounded by dense green pine forests, enchanting views of snow mountains, around… and the ravishing Ganga in her different moods sometimes serene and wide.. sometimes narrow and mysterious deep down in the valley .. but always stealing the show..

I don’t like to repeat myself... The scenery was spellbinding. Was it the physiological acclimatisation to the high altitude…? The twists and turns making me giddy…? Was it the smell of the blue pines that filled the crisp, chilly mountain air…? Or the visual splendor of the flowing Ganga and the snow peaks that seemed to touch the sky
Heavenly.. Divine..No wonder it drove me crazy.


One sight that filled me with amazement was the Suspension Bridge at the Bhiron Ghati gorge.. The bridge was built over a deep ..deep gorge formed by the Jadh Ganga. Built by E.E Wilson..

A legend prevails in the mountain villages of a holy trail in the Garhwal hills, that the restless ghost of a raja rides his half Arab-grey horse across the rocky trails on moonlit nights. The ancient Ganga weeps in sympathy at Harsil as she listens to the retreating hoof beats swing by the dilapidated bungalow on the road to Gangotri. It was here that Pahari Wilson or raja Wilson as he was referred to settled down with Gulabi, a local girl in his Wilson hut, a grand bungalow.

Mystery still shrouds the adventurer EE Wilson’s origins. Some believe that he came from Lancashire in bonny England. Others say that he left the British army in disgrace and found refuge amongst the Garhwal Himalayas.

When Wilson built the suspension bridge at Bhairon Ghati Gorge Over the Jadh Ganga, the locals were too petrified to venture into it. Leaping onto his Arab, Wilson galloped up and down the bridge. Even today, on a full moon night, the locals believe that Raja Wilson rides again….

Thank God the last night had not been a full moon night…!!

I wanted to take a photo of the bridge, but photography is not permitted.I tried with my camera hidden in the shawl.. but just when I was about to click, a guard came and told me..”Photography karna mana hai ma'm”

The Qualis moved ahead..Wow! We were reaching Gangotri…!

You are such a good writer.. I could see myself doing all those stunts like pinching cheeks.. infact did that this morning to the oldest and she was pretty mad!!
waiting for the update!!
Sarah

I can see that you are enjoying yourself. Have fun. It will be a cultural shock when you come back. It is raining 24 hours here...

I love the description. you write well.and seem to be having a lot of fun.

:)
Doc!!!! U should seriously think about changing your profession or atleast think about writting a travelogue!!! this is awesome... I almost felt like I was in that Qualis with You Guys!!

all of us r already drooling here...

sigh!
reminds me of my childhood ..
mountains and valleys.. thats where I feel so much at home ..

Very well n nicely u described it all :)

Hope u n rest everything is fine at ur side.

I am taking leave and going to Himalayas tomorrow.
Only if they allow me to :)).

Was thinking of James Baldwin, once I was done going thru' ur post ~ I met a lot of people on the way; I even encountered myself!

arre, how come i missed out so many posts of urs. anyway was that u in that pic in the earlier post? and are u still travelling??

ps: the word given here for verification looks all hurled up. i serioulsy cant read it properly!!! whom will i complain to???

I read your posts on Gangotri trip and esp on Harsil.

In fact, I was searching for Harsil info and arrived at your blog. Me too have been to this place and was simply stunned by the beauty and simplicity of the place. It was this reason that this time, I decided to visit the place again. However there are some questions, which I will post to you via email.

I dream of going there one day.

wow Anu!! looks like u had loads of fun!!

wowo!
This sounds so amazingly fabulous!
Just the kinda place I wanna be in right now!:-(

Yes i've been to bhairon ghati and gangotri, gaumukh etc. even to that old dilapidated House of raja wilson but even being there i din't drown into that beauty of place as i did while reading your article. Do you believe in ghost? i do.